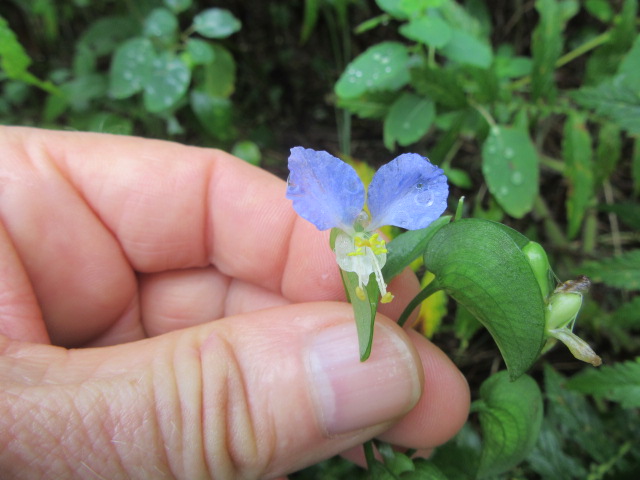 Commelina erecta L. is the accepted scientific name for this species of Dayflower. It was named and described as such by Carl von Linnaeus in the first volume of the first edition of Species Plantarum in 1753.

The genus, Commelina Plum. ex L., was described as such by Carl von Linnaeus in the first edition of Species Plantarum in 1753. Mr. Linnaeus noted that the genus had been previously named and described by Charles Plumier.

As of 12-15-22 when this page was last updated, Plants of the World Online list 200 species in the Commelina genus. It is a member of the plant family Commelinaceae with 39 genera. Those numbers could change as updates are made on POWO.

Distribution map of Commelina erecta from Plants of the World Online. Facilitated by the Royal Botanic Gardens, Kew. Published on the Internet; http://www.plantsoftheworldonline.org/. Retrieved January 30, 2020.

The above distribution map of Commelina erecta from Plants of the World Online shows where the species is native in green and introduced in purple. The map on the USDA Plants Database for North America is similar. 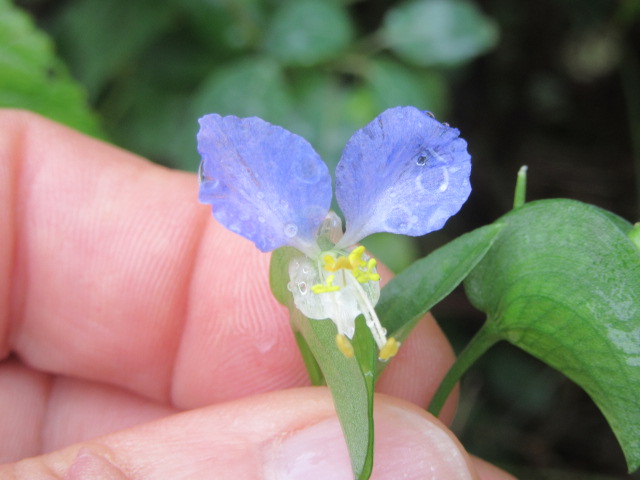 2019 was a great year for identifying wildflowers on the farm. I took photos of Dayflowers in 2018 but I was just barely getting started identifying the wildflowers here. In 2019, I decided to ID as many as I could but I got fairly busy at a friend’s farm. It wasn’t until the end of August that I took the first photos of Commelina erecta and I didn’t see any C. communis until September 1.

The Commelina erecta were in a very large colony along kind of ditch where the pasture drains into that leads to the pond. At first, I was checking their flowers sterile anthers for reddish-brown dots which is a characteristic of C. communis. There was a strange problem… The spath-like bracts the flowers emerge from on Commelina erecta are supposed to be fused together while the bracts of C. communis are supposed to be open (like a taco). However, all the flowers in this colony were open instead of fused… The flowers had light blue petals (C. communis has darker flowers) and no reddish-brown dots like C. erecta… So why were their bracts open instead of closed? 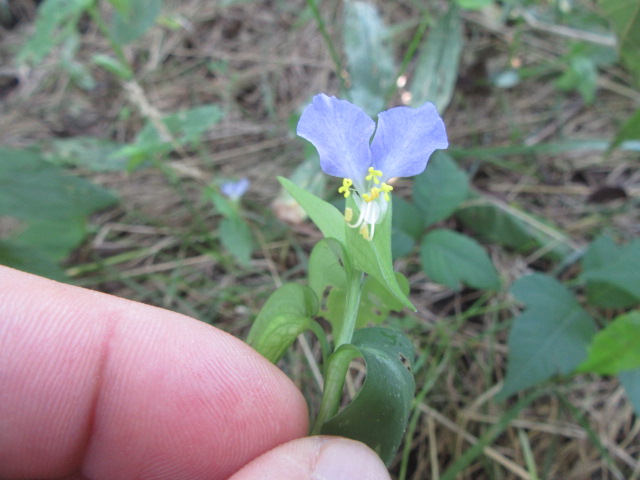 Flowers emerge from spathelike bracts at the top of the stems. 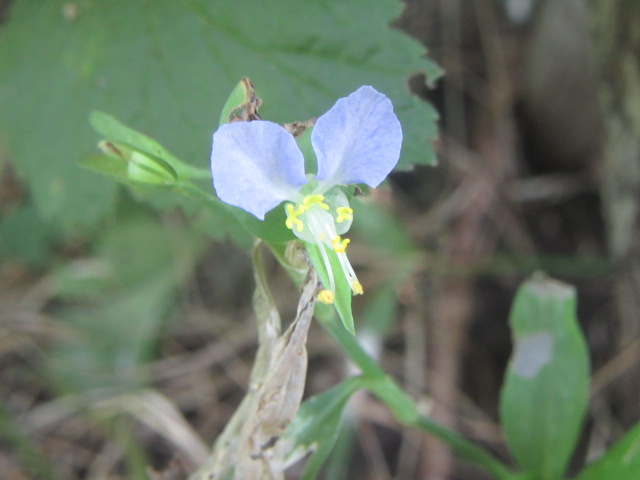 Flowers have two upper blue petals and a smaller lower white petal. Flowers have three false anthers and three fertile anthers. The petals are a lighter blue than C. communis and they have no reddish-brown spots. 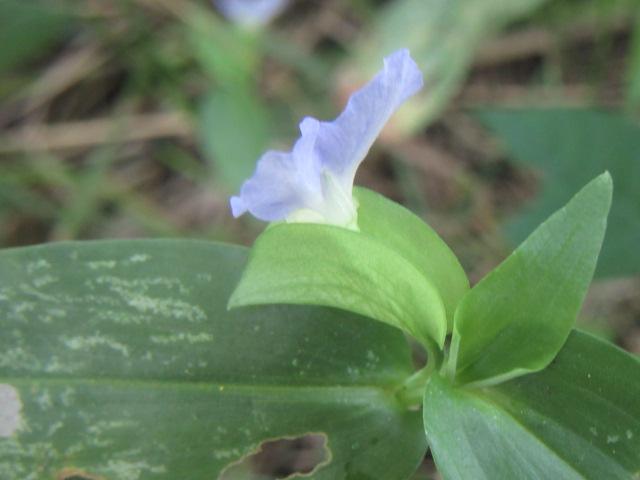 Here again, the above photo shows an open bract instead of being fused at the lower third like it is supposed to be… The bract is folded so what looks like the lower part is actually the midrib. 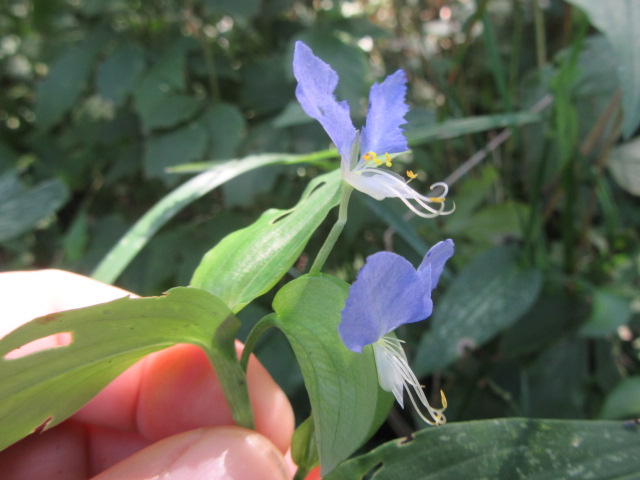 NICE! Flowers open in succession, but many bracts have two flowers that are open at the same time. Flowers supposedly only last for one day. 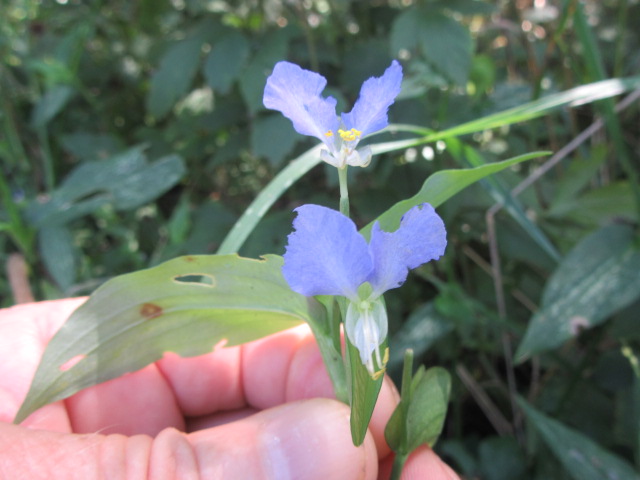 I am running out of words to say about the flowers… 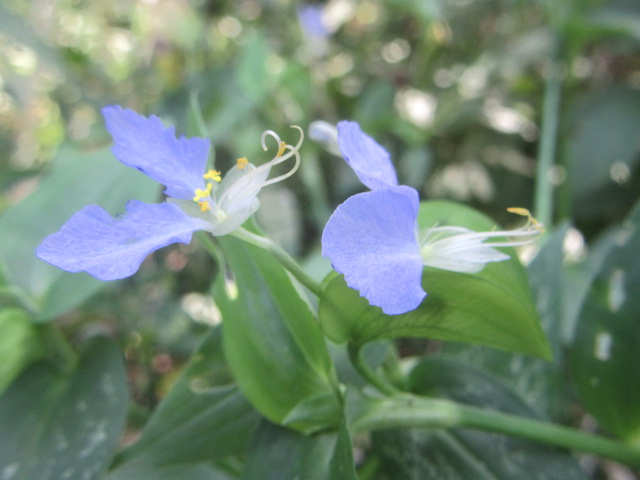 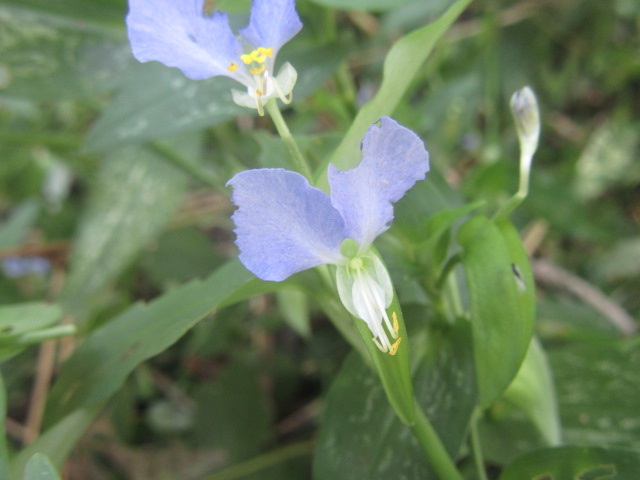 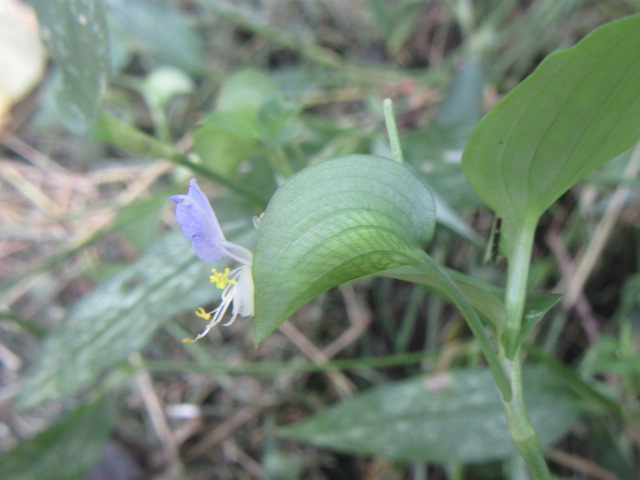 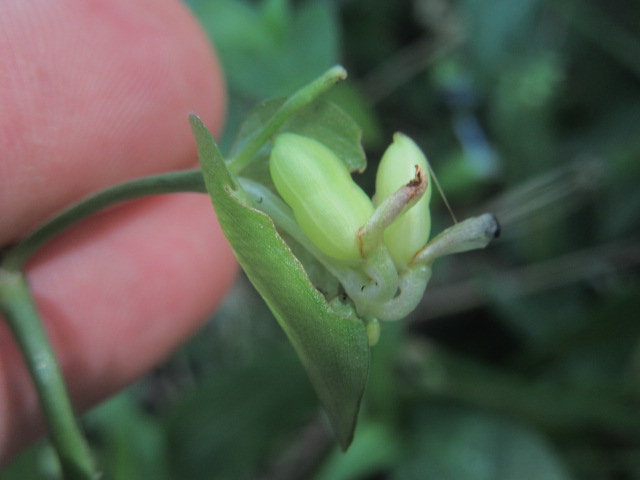 The ovaries are where the seed is produced. 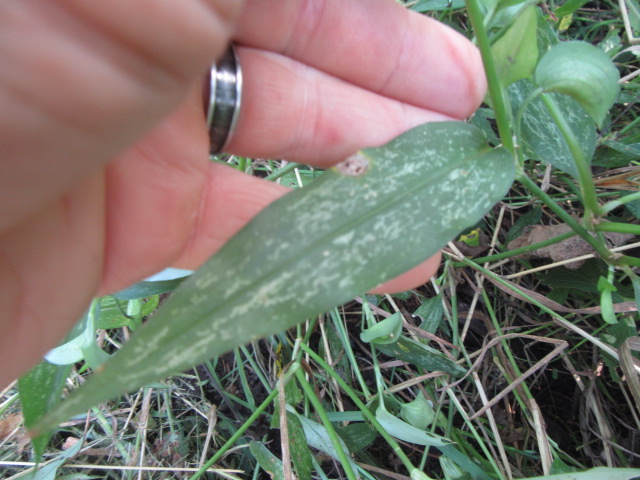 Leaves are lanceolate to slightly ovate and have a sheath that surrounds the stems. The sheaths have small white hairs. Leaves grow in an alternate pattern on the stems. 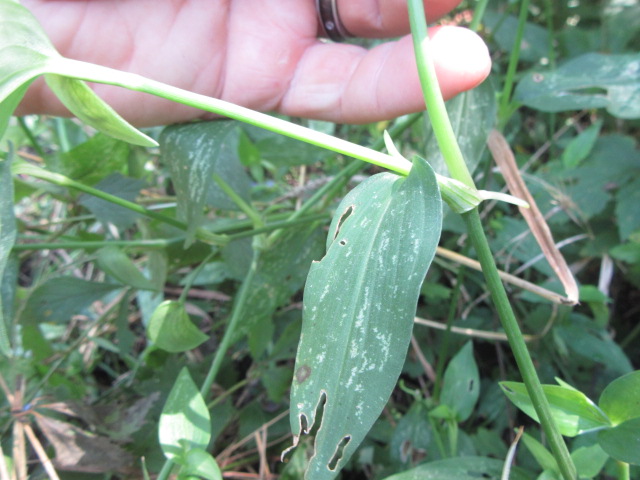 Here is a better photo of the leaf sheaths… 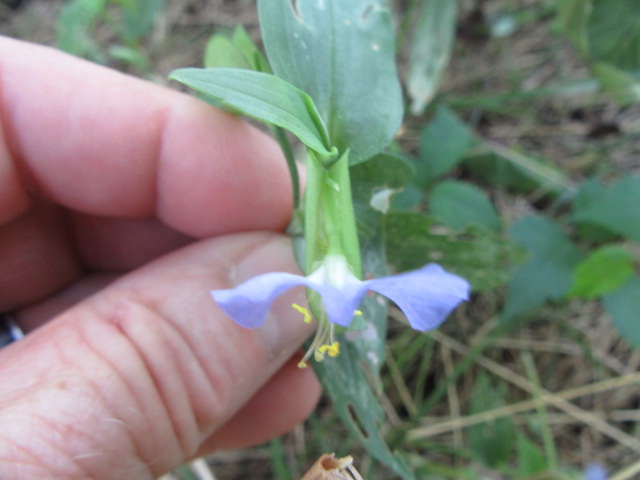 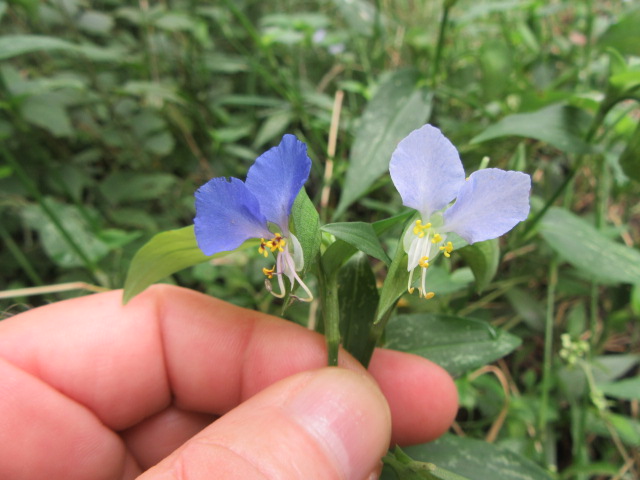 Finally, on September 1 as I was leaving the area, I looked down on the left side of where I went in and spotted a few plants with darker blue flowers. I took a closer look and low and behold the sterile anthers had reddish-brown spots. I had found Commelina communis! But, something was weird! Their bracts were fused together where they should have been open! I thought maybe I had them backwards even though I was sure I knew what I was looking for. After I took several photos, I went back inside to check. Sure enough, Commelina communis are supposed to have open bracts. That is one of the feature characteristics that separate it from C. erecta, besides having reddish-brown spots. 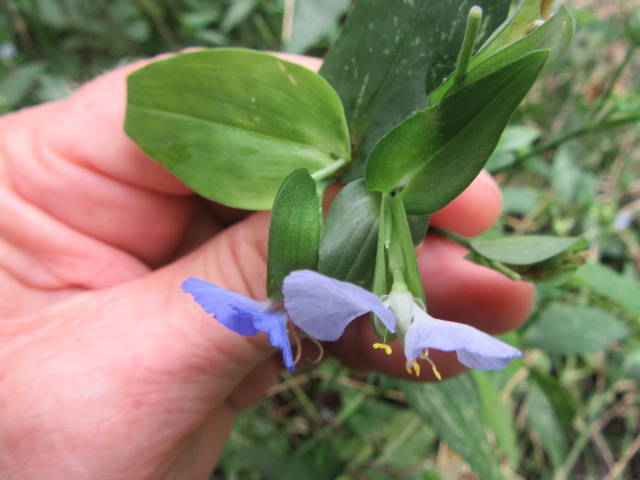 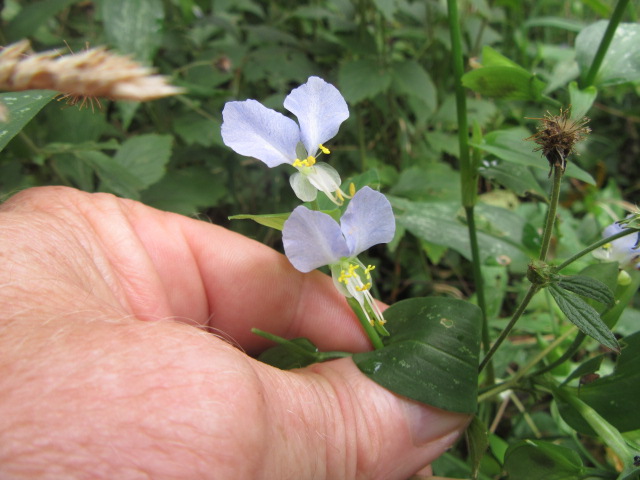 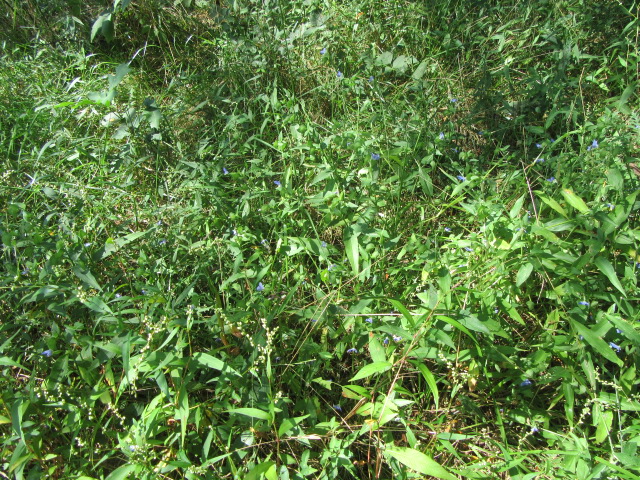 Photo of the large colony of Commelina erecta by the pond in the back pasture. Commelina erecta, like other species in the genus, have erect to ascending stems. That means they grow upright until they get long enough to sprawl. Stems on the ground root at the nodes. 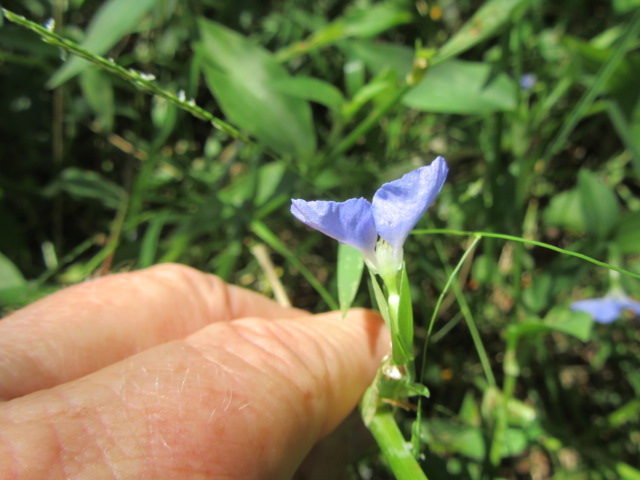 I took a lot of photos of the flowers and bracts because they are the most interesting part of the plant. 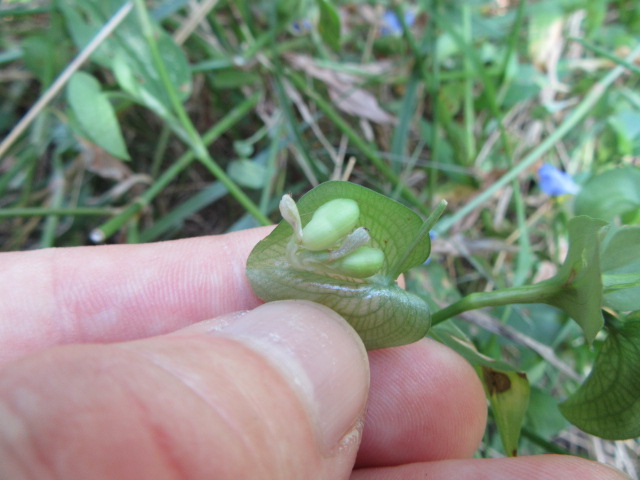 I opened this bract which shows two ovaries inside. 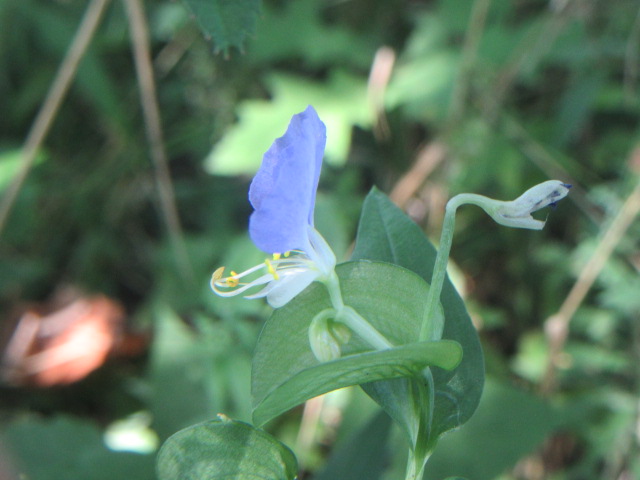 The above is a good photo showing the flower with a short peduncle between the flower and ovary. Strange how Commelina erecta is supposed to have bracts that are fused together at the lower third… How can they be fused together when a flower is coming out? They are probably fused together initially but open as it matures… 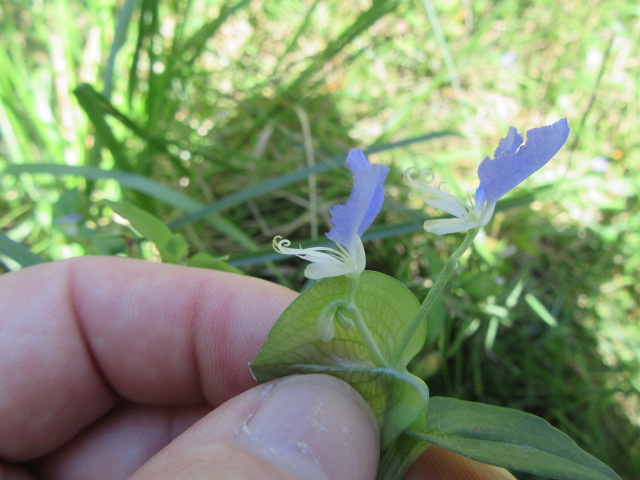 The flowers are so neat I can’t help taking a lot of photos of them. You never know when some of the photos are going to be blurry. 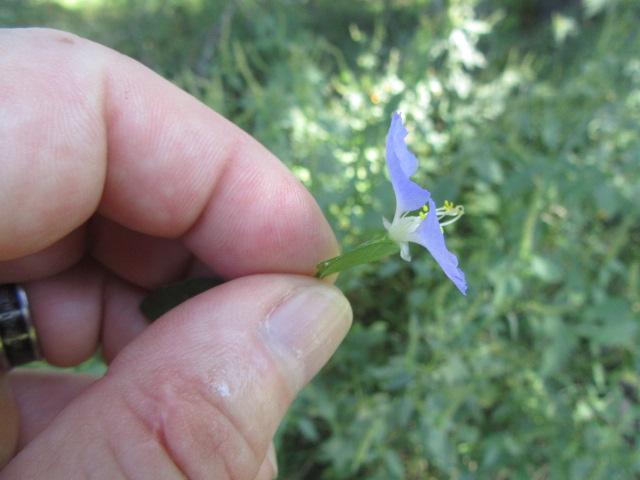 AHHHHH. I looked at hundreds of flowers and bracts and FINALLY found this one with a fused bract! How about that! 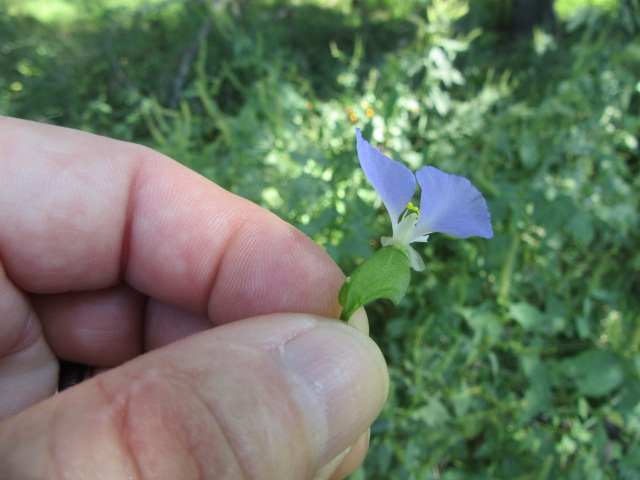 As you can see in the above photo, the bract is fused at the lower third and a flower is starting to emerge next to the stem. 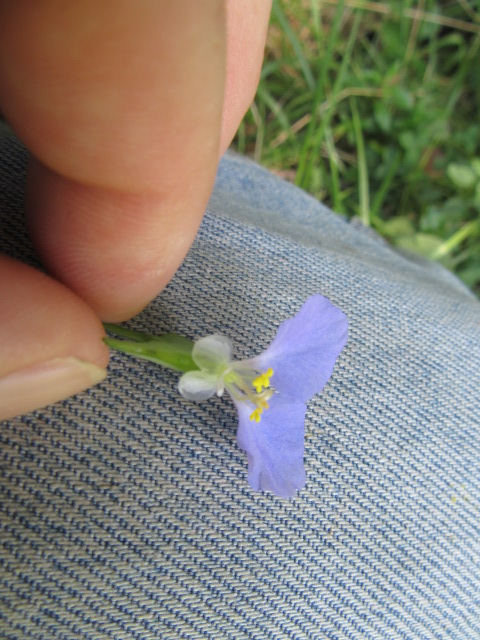 I didn’t take any new flowers of the Commelina species in 2020. I was too busy identifying more wildflowers and doing other things. Maybe I can take more photos in 2021. Many of the links below give better descriptions and photos.

I also have pages for Commelina diffusa (Spreading Dayflower) and Commelina communis (Asiatic Dayflower) if you are interested.

I haven’t noticed any Commelina erecta or C. diffusa since 2019, but C. communis comes up around the yard in a few areas and in the north flower bed. I will keep looking…

I have enjoyed photographing and learning about the many wildflowers growing on the farm and in other areas. I have grown over 500 different plants and identified over 250 species of wildflowers (most have pages listed on the right side of the blog). I am not an expert, botanist, or horticulturalist. I just like growing, photographing and writing about my experience. I rely on several websites for ID and a horticulturalist I contact if I cannot figure them out. Wildflowers can be somewhat variable from location to location, so sometimes it gets a bit confusing. If you see I have made an error, please let me know so I can correct what I have written.