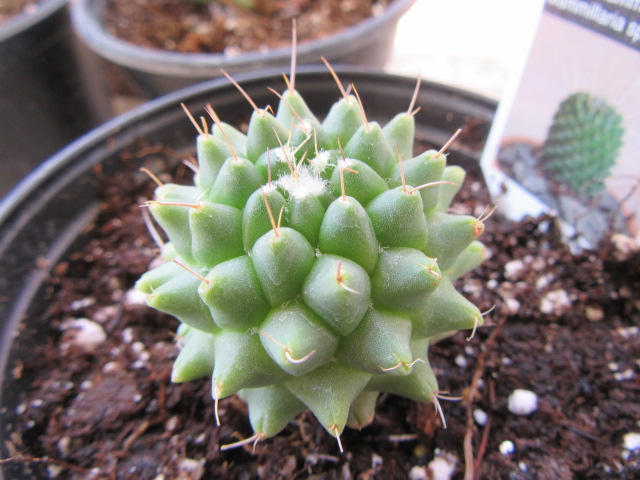 Plants of the World Online by Kew lists 107 synonyms of Mammillaria spinosissima which you can see HERE. I didn’t want to add the whole list on this page…

Mammillaria spinosissima Lem. is the correct and accepted scientific name for this species of Mammillaria. It was named and described as such by Antione Charles Lemaire in Cactearum Aliquot Novarum in 1838.

The genus, Mammillaria Haw., was named and described as such by Adrian Hardy Haworth in Synopsis Plantarum Succulentarum in 1812.

As of 11-12-21 when this page was last updated, Plants of the World Online lists 154 species in the Mammillaria genus. It is a member of the plant family Cactaceae with 146 genera. Those numbers could change as updates are made on POWO.

I brought this cactus home from Wagler’s Greenhouse (one of three Amish-owned local greenhouses) on 4-3-21 labeled Mammillaria spinosissima ‘Un Pico’. Actually, I saw about 40 or so of these plants on Thursday but  I wasn’t sure if I possibly already had one. I knew I didn’t have one by that name, but you know how plant names change, and I have several that looked similar. I wrote down the name to double-check to make sure it wasn’t a synonym of a species I already had. When I found out I didn’t have this one, I went back on April 2 and found out that they had been moved. When I did find them, they were in a different location and there were only a few left. Unfortunately, it was Good Friday so they were closed. One of Mrs. Wagler’s granddaughters hid one I selected and I picked it up the next day.

The species Mammillaria spinosissima is a highly variable and VERY spiny species of cactus. The cultivar ‘Un Pico’, however, is a selection of a stable genetic mutation that only produces one long central spine and some may have none. The particular plant I brought home, however, has a few areoles with more than one spine. Time will tell if it is actually a Mammillaria spinosissima ‘Un Pico’ because it has some growing to do… Common names for the species include Bald-Headed Irishman and Spiny Pincushion Cactus. “Un Pico’ should be called the Bald-Headed Irishman (even though the species is a native of Mexico).

When I brought this plant home, I measured it at 1 1/2” tall x 1 5/8” wide. It was in a 4 1/4” diameter x 3 1/3” tall pot. I will repot this plant and put it in a mixture more suitable for cactus and check its roots for a plug wrapper. I don’t like my plant’s roots having to try and grow through the wrapper… 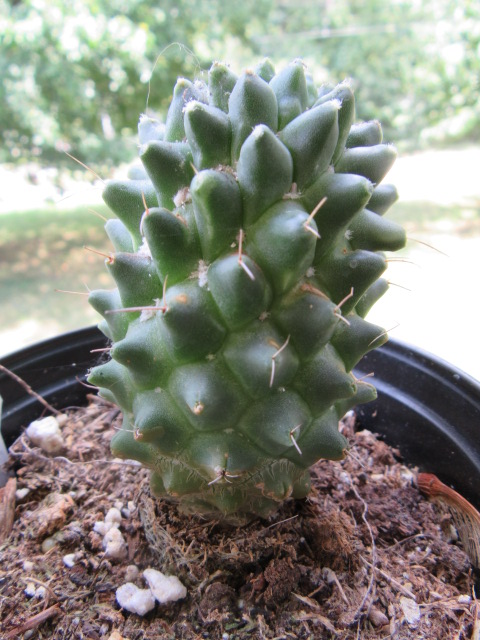 I measured the plants on the front porch on 8-18-21 instead of wating to do them all as I bring them inside for the winter in October. I didn’t have them inside until October 28 in 2021 because there wasn’t an “F” in the forecast until then. The Mammillaria spinosissima ‘Un Pico’ did very well over the summer and grew to 3″ tall x 1 7/8″ wide. It doubled in height…

You have to sort of mimic the soil where species grow in their native habitat. For that, you almost have to go see for yourself… Typically, they grow in fairly rocky soil.

There isn’t much online about the species or ‘Un Pico’ except for online stores. I will continue adding more photos and information as time goes by.

I hope you enjoyed this page and maybe found it useful. If you have any comments, questions, or suggestions, I would like to hear from you. Please click on “like” if you visited this page. It helps us bloggers stay motivated. 🙂 You can check out the links below for further reading. The links take you directly to the genus and species of this plant. If you see I have made an error, please let me know in a comment or email me at thebelmontrooster@yahoo.com.

NOTE: The figures may not match on these websites. It depends on when and how they make updates and when their sources make updates (and if they update their sources or even read what they say). Some websites have hundreds and even many thousands of species to keep up with. Accepted scientific names change periodically and it can be hard to keep with as well. In my opinion, Plants of the World Online by Kew is the most reliable and up-to-date plant database and they make updates on a regular basis. I make updates at least once a year and when I write new pages and add new photos but I do get behind. We are all a work in progress. 🙂