Plants of the World Online by Kew lists 49 species in the Tagetes genus (as of 11-3-21 when I last updated this page). It is a member of the plant family Asteraceae with 1,678 genera. Those numbers could change as updates are made on POWO. The number of genera in the family fluctuates quite often.

I started growing Marigold ‘Brocade’ while I was living at the mansion in Leland, Mississippi. I grew several other cultivars but ‘Brocade’was my favorite. I liked the dark mahogany-red flowers with the petals edged in gold the best.

As you can see in the above photo, ‘Brocade’ is a double French type Marigold. Previously, French types were considered Tagetes patula, but now they have found their way to the genus Tagetes erecta. Many scientific names have changed over the past several years, and some of the changes have been surprising. Previously, the taller Marigolds were Tagetes erecta while the shorter, bushier types were Tagetes patula… I am not a botanist, so I just go with the flow…

When I first started growing the Marigold ‘Brocade’ I liked the redder flowers the best. SO, I saved the seeds in 2012 from just the red flowers. After I moved to Missouri I planted the seeds in the bed behind the old foundation (where my grandparent’s former home was). Very few seeds came up but they were red. SO, I saved seeds from them plus several came up volunteer. There were more in 2014.

By 2016 I didn’t even have to plant seeds because enough were coming up volunteer. I transplanted a lot of them into the northeast corner bed behind the foundation. As you can see in the above photo they appear to be all red.

I didn’t even collect seeds and in the spring of 2017 but hundreds were coming up from seed on their own. BUT, they weren’t all red this time. Many are orange…

Now that is a beautiful red flower. Deep mahogany red edged with gold and a gold center, which gets larger as the flower matures.

I transplanted a whole row of Marigold ‘Brocade’ in front of the bed on the south side of the house. The plants grew HUGE and one measured 33 1/2″ tall x 36 1/2″ wide on August 20 (2018). Ummm… Information online says Marigold ‘Brocade’ grows to around 12″ tall… The plants had a lot of buds… 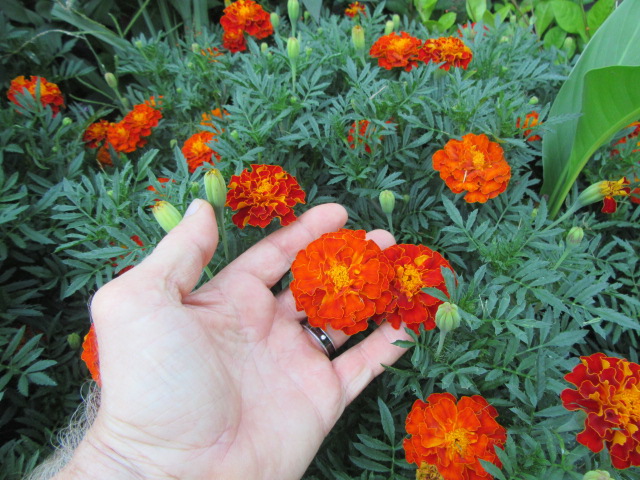 The seeds came up like crazy in 2017 and I had to thin them out quite a bit and transplant as many as I could in other areas… GEEZ!

I transplanted a few in the northeast corner bed next to the old foundation where I had put the Rudbeckia fulgida var. sullivantii ‘Goldsturm’. There were also a few native Rudbeckia hirta in the bed. Ummm… There is also rhubarb, horseradish, and Iris in this bed… 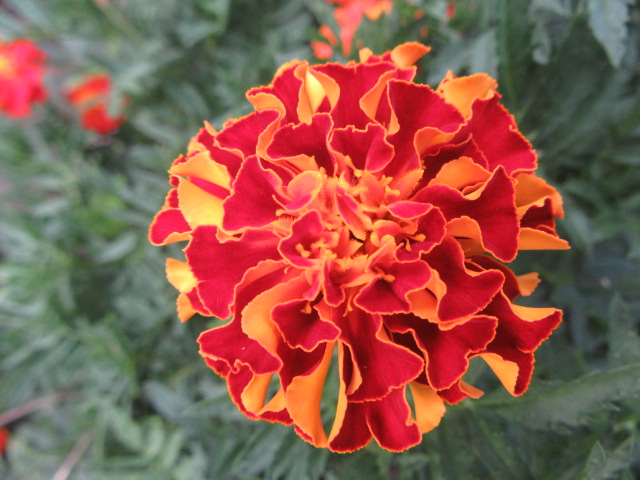 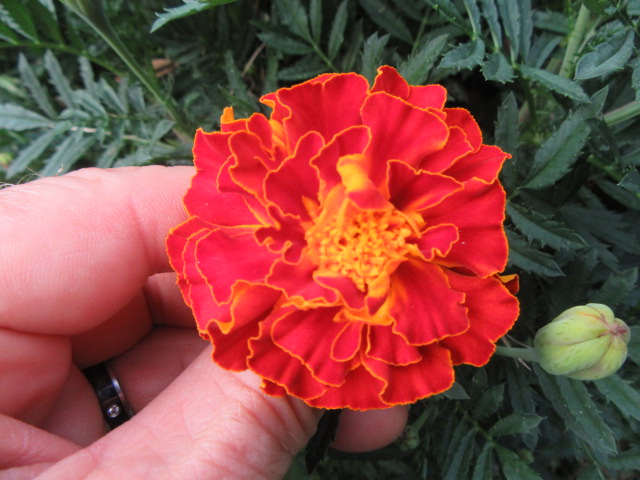 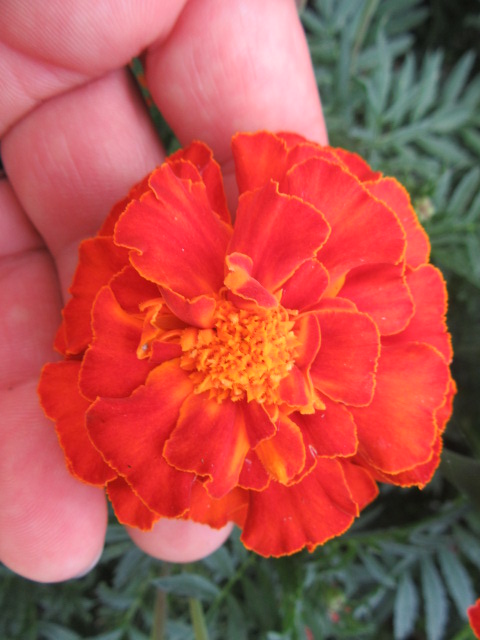 I think this is the same plant that I measured from before. Photo #367-18.

Here it is again… But you see what happens when the plants get LOADED with flowers. They get heavy and the branches collapse. When this happened in Mississippi, I would go to the alley and cut small bamboo stakes and place them around the plants. I tied a twine all around the plants a stood them back up… I don’t have bamboo here so I have to use small branches. They never grew this tall in Mississippi, though… 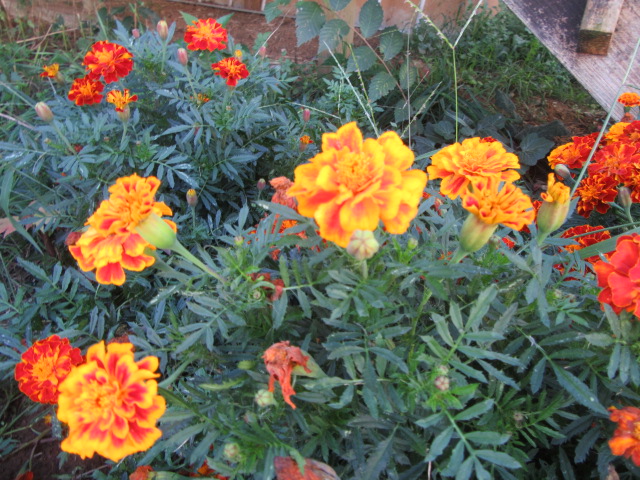 I also had a patch of Marigold ‘Brocade’ in a corner bed next to the steps on the back deck… Temperatures were getting cooler and I had to move the potted plants inside for the winter. I know what is soon to happen…

Even after a light “F”, the Marigolds were still looking pretty good. The flowers really turned RED…

By October 28, time was running out for the Marigolds…

In 2018, the Marigolds still came up here and there but not like in 2017. It all depends on how hard a winter we have. I transplanted quite a few in the corner bed by the back porch… 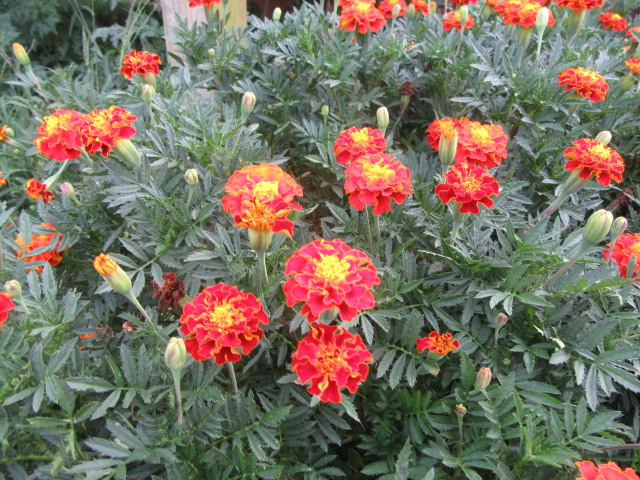 Luckily, most of the flowers were nice and dark red… Even though the Marigolds continue to come up here and there, they have fizzled out a lot. I need to collect seeds in 2021 just in case they fail to come up in 2022. We had a very cold mid-February in 2021, we will just have to see what happens… Hopefully, several seeds will make it through the winter…

Marigolds grow their best and make more sturdy plants when they are grown in full sun. They are very drought tolerant and will continue to grow and flower until they get zapped by frost.