Leucanthemum vulgare Lam. is the correct and accepted scientific name for this species of Leucanthemum. It was named and described as such by Jean-Baptiste Pierre Antoine de Monet de Lamarck in Flore Françoise in 1779.

The genus, Leucanthemum Mill., was named and described as such by Philip Miller in the fourth edition of The Gardeners Dictionary in 1754.

As of 12-23-21 when this page was last updated, Plants of the World Online by Kew lists 48 species in the genus. It is a member of the plant family Asteraceae with 1,678 genera. Those numbers could change as updates are made on POWO. The number of genera in the family fluctuates quite often.

Distribution map for Leucanthemum vulgare from Plants of the World Online. Facilitated by the Royal Botanic Gardens, Kew. Published on the Internet; http://www.plantsoftheworldonline.org/. Retrieved on February 24, 2020.

Distribution map for Leucanthemum vulgare from the USDA Plants Database. Published on the internet at https://plants.sc.egov.usda.gov/home. Retrieved on May 15, 2021.

The map on the USDA Plants Database for North America shows the species is found in all 50 states and most of Canada. Can’t get much more widespread than that… 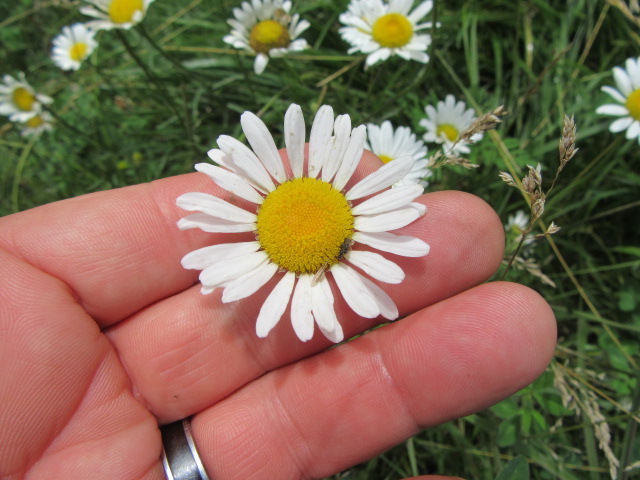 The flowers consist of 15-35 ray florets, which most people call petals, and are usually 1 1/4”-2” in diameter. The petals have toothed ends but you can see that in the above photo. Maybe I can get a close-up at some point. The center of the flower consists of who knows how many disc flowers which, of course, are yellow. The yellow corollas are 5-lobed. Check out Missouri Plants and you can see a close-up of the disc.

Fowers can produce up to 200 seeds each and plants as many as 26,000 seeds that can remain viable for up to 40 years!

The stems of Leucanthemum vulgare are generally glabrous (not hairy) but sometimes slightly hairy. GEEZ! Branching occurs mainly from the base of the plant where there are usually a lot of leaves.

The shape of the leaves is called “oblanceolate” (lanceolate with the more pointed end at the base) or “spatulate” (broad at the base). I wonder why they don’t call them “spathulate” (broad at the tip (apex) and tapered toward the base)? Lower and basal leaves have kind of long petioles (stem between the main stem and base of the leaf) while the upper leaves are sessile (no petioles) and may even tend to clasp the main stem. The leaves are deeply serrated, sometimes cut nearly to the midrib and are hairless.

Leucanthemum vulgare is fairly popular as an ornamental perennial plant in flower beds and wildflower gardens. There are several cultivars available. It will grow well in full sun to part shade and prefers a fairly moist environment.

I photographed the Leucanthemum vulgare at a friend’s farm in Johnson County. Steyermark’s Flora of Missouri doesn’t list them in Johnson County, but indeed they are there. Hopefully, I will find this colony again in 2020 and may even bring a few to my farm. I live on a small farm in Windsor, Missouri (the city limits is across the street and on the north and south side). I am in Pettis County but Henry is across the street and Benton and Johnson Counties aren’t far away.

I have enjoyed photographing and learning about the many wildflowers growing on the farm and other areas. I have grown over 500 different plants and most have pages listed on the right side of the blog. I am not an expert, botanist, or horticulturalist. I just like growing, photographing and writing about my experience. I rely on several websites for ID and a horticulturalist I contact if I cannot figure them out. The iNaturalist website also has a great drag-and-drop way to identify wildflowers, brds, insects, etc. Wildflowers can be somewhat variable from location to location, so sometimes it gets a bit confusing. If you see I have made an error, please let me know so I can correct what I have written.

I hope you found this page useful and be sure to check the links below for more information. Some databases may not be up-to-date but they are always a work in progress. They were written by experts and provide much more information. If you can, I would appreciate it if you would click on the “Like” below and leave a comment. It helps us bloggers stay motivated. You can also send an email to me at thebelmontrooster@yahoo.com. I would enjoy hearing from you especially if you find something is a bit whacky (like the links below not working).