The genus, Haworthiopsis G.D.Rowley, was also named and described by Gordon Douglas Rowley in Alsterworthia International, Special Issue 10:4 in 2013.

Plants of the World Online currently lists 19 accepted species in the Haworthiopsis genus (as of 10-15-21 when this page was last updated). It is a member of the plant family Asphodelaceae with 40 genera. Those numbers could change as updates are made on POWO.

Before, the two-lipped flowers were a distinguishing feature of the Haworthia genus. After extensive study, more detailed features of the flowers clearly identified three separate genera (Haworthia, Haworthiopsis, and Tulista). This certainly doesn’t mean the genus names won’t change again. You just never know… You can use whichever name you choose because both scientific names were validly published. It is just that Plants of the World Online by Kew (Royal Botanic Gardens) and whoever is in charge of plant names says Haworthiopsis is now the accepted genus name.

I received this Haworthiopsis  ’Super White’ from Nico Britsch of Succulent Market on August 27, 2020. He contacted me with a request to mention his business in a post in exchange for a few plants. How could I refuse that?

I selected five plants, including this Haworthiopsis ’Super White’. The plants were nicely packed and arrived quickly and safely. The plants were in a 4” pot, larger than many you buy online or at retail stores. The Haworthiopsis ’Super White’ was 3 1/4” tall x 5 1/2” wide which is a very good size… I didn’t measure the plants until October 6 when I wrote the post about the plants and Succulent Market. To view the post click HERE.

Nico is the third generation of cactus and succulent growers in California. He said his grandfather selected this Haworthia fasciata over a period of years to have more white on its leaves thus making it better for low light situations. There are MANY cultivars available similar to this one… But, there is an issue with the name…

*Haworthiopsis are native of the Eastern Cape Provinces in South Africa where they grow in grassy areas among small shrubs. In this situation, they receive filtered light. Many websites say they need bright light or full sun, but that is not likely the case. If you grow this plant in full sun, the leaves will likely burn. Of course, that depends on your location and how long they are in the sun… I don’t really have many succulents that “prefer” full sun over light to part shade here in midwest Missouri (USA), so they stay on tables on the front porch from May through mid-October on the west side of the house. They receive bright light but not full sun. There are periods of time in the afternoon where they get a little direct sun which also depends on where they are situated. They may get moved around a bit depending on their requirements. Most of the cactus are on the back porch in full sun. During the winter, most of the succulents are on a large shelf (multi-level) in front of a south-facing window in a cool bedroom. Some of them are on a shelf in front of a west-facing window in my bedroom where they receive kind of bright indirect sun. Cactus are not particular about light during the winter. For many years they were on a table in front of an east-facing sliding door in the dining room during the winter. Now they are on the new shelf in my bedroom.

I have not grown any Haworthiopsis (or Haworthia) for many years, and never one like Haworthiopsis attenuata. I have grown many Aloe for MANY years which probably have basically the same requirements. They are all SUMMER DORMANT which means they supposedly take a rest during the hotter months for 6-8 weeks from sometime in July through mid-August. Otherwise, their main growing period is from April through November, or thereabouts. From December through March, they are not exactly dormant, but their growth is slowed down so it is advisable not to hardly ever water during that period either. During their summer dormacy period, their growth above the soil kind of stops, but they are renewing their roots using material from the old roots. SO, during that time, you should avoid giving them too much water as well. Generally, when I water during the summer, I just go over the succulents without overly soaking them.

I have not grown any Haworthiopsis (or Haworthia) for many years, and never one like Haworthiopsis attenuata. I have grown many Aloe for MANY years which probably have basically the same requirements. They are listed as SUMMER DORMANT which means they supposedly take a rest during the hotter months for 6-8 weeks from sometime in July through mid-August. Otherwise, their main growing period is from April through November, or thereabouts. From December through March, they are not exactly dormant, but their growth is slowed down so it is advisable not to hardly ever water during that period either. During their summer dormacy period, their growth above the soil kind of stops, but they are renewing their roots using material from the old roots. SO, during that time, you should avoid giving them too much water as well. Generally, when I water during the summer, I just go over the succulents without overly soaking them. Their leaves store water, so if you water more in May through June, it will carry them through July through August. Then, if you water more in 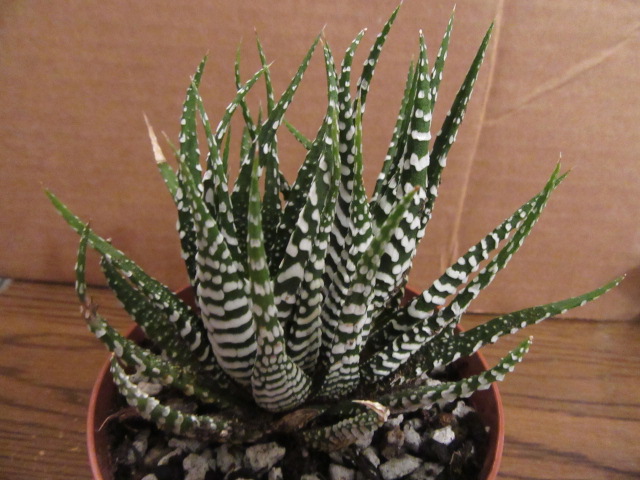 When I was writing this page on December 8, I took a couple more photos and noticed the potting soil was very hard. SO, I mixed enough Miracle Grow Potting Soil and pumice (50/50) and gave it a fresh mix. I left it in the same pot that it came in because it is still big enough (4″). After that, I put it on the shelf in my bedroom. It’s amazing how much I learn when I am writing plant pages…

As I mentioned earlier, I have not had any Haworthia companions for quite a long time. I had a Haworthia emelyae and H. herbacea in 2009 when I was a succulent newbie and I overwatered them and they eventually died. Well, I think they were both a more delicate species in the first place. The Haworthiopsis attenuata ‘Super White’ is apparently not that delicate so I don’t see any future problems with it as long as I follow the “rules” which seem pretty simple. 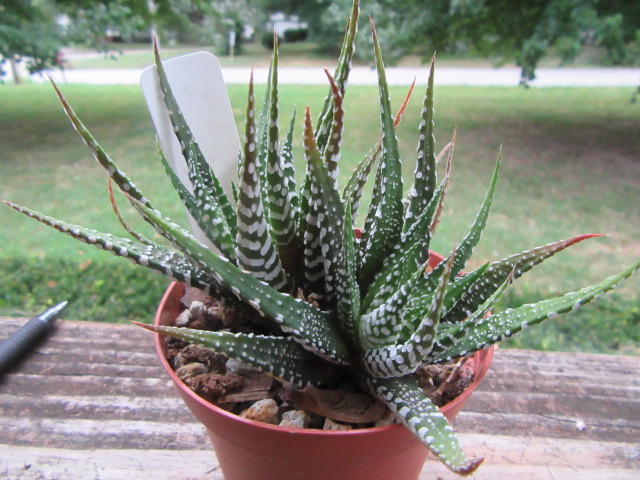 The Haworthiopsis attenuata ‘Super White’ has done very well outside over the summer. It has grown 1/4″ taller since it arrived in August 2020.

I hope you enjoyed this page and maybe found it useful. If you have any comments, questions, or suggestions, I would like to hear from you. Please click on “like” if you can and have visited this page. It helps us bloggers stay motivated. 🙂 You can check out the links below for further reading. The links take you directly to the genus and species of this plant. Some sites may not be updated to the current accepted scientific name or just choose to use the previous one. Also, some information about growing plants reflects the author’s opinion and not necessarily what I would recommend… You can always email me at thebelmontrooster@yahoo.com.