The plant family Asparagaceae was named and described as such by Antoine Laurent de Jussieu in Genera Plantarum in 1789.

As of 10-8-21 when this page was last updated, Plants of the World Online lists 120 accepted genera in the plant family Asparagaceae. The family has become more diverse over the years as members of other families have been combined. It seems weird that Agave, Asparagus, and Hosta species are in the same family (just to mention a few).

There are links to the pages of the members of the plant family Asparagaceae I have experience with, mostly as potted plants. Muscari armeniacum (Grape Hyacinth) grows in the yard and Ornithogalum umbellatum (Common Star of Bethlehem) grows in the pasture here on the farm.

My mother, at 81, standing behind my cousin’s Asparagus densiflorus on 8-29-13, #180-2. Even though mom was pretty short, this is STILL the biggest Asparagus Fern I have ever seen. Mom passed away on November 30, 2015, so I am very glad I took her photo standing behind Mike and Lois Miller’s plant at the Miller Seed Company in Clinton, Missouri. Mike and Lois have since retired.

When I was living in Mississippi, I kept several Asparagus densiflorus (Asparagus Fern) at the mansion for very good friends (Thomas and Tarlei Hitchcock) for a while. They had several of these and they were not all alike. I think, although not positive, they were different varieties of Asparagus densiflorus. The page for this species has photos of all of them.

The Aspidistra elatior (Cast Iron Plant) was one of several plants growing at the mansion in Leland, Mississippi. They are pretty neat plants that can get a little raggy looking with age. They are very tough plants and forget about just pulling them up. Their flowers are also very weird and literally grow at ground level under the leaves.

I had several Beaucarnea recurvata (Ponytail Palm) while I lived in Mississippi. They were great plants but I gave two to a friend when I left and moved back to the family farm in Missouri. I eventually gave that plant up… Hopefully, someday I will have adequate space for another one.

This Chlorophytum comosum ‘Variegatum’ (Spider Plant) was given to me by a friend and fellow plant collector when I lived in Mississippi. I gave it to someone else when I moved… These plants can get quite large over time and can take a lot of maintenance. Even so, they are pretty neat… 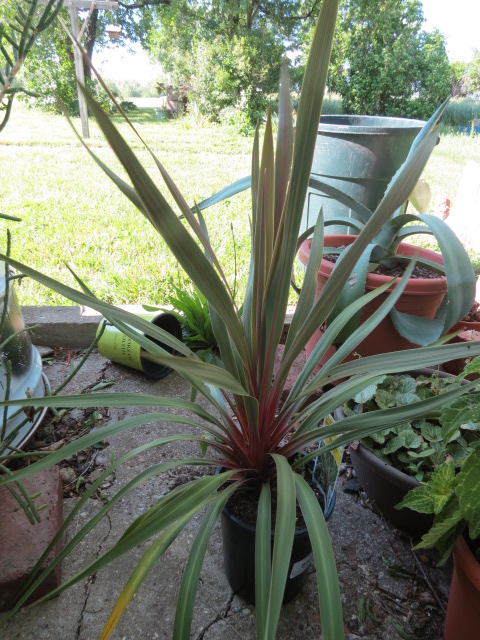 I brought this Cordyline australis ‘Sundance’ (Cabbage Palm) home in 2014 and used it as a centerpiece in a planter. They make great plants in combination planters.

This Cordyline fruticosa (Hawaiian Ti Plant, Good Luck Plant, Etc.) was another plant that belonged to Thomas and Tarlei Hitchcock in Mississippi. I also had their green one…

Dracaena hanningtonii  (syn. Sansevieria ehrenbergii) ‘Samurai’ or ‘Dwarf Samurai’ is a dwarf version with very interesting leaves. I ran across it at Wal-Mart in 2020 and just had to bring it home.

I was surprised when testing proved Dracaena and Sansevieria belonged in the same genus. Since Dracaena was named first, species in the Sansieveria genus were moved to Dracaena. Most had previously been in the Dracaena genus anyway although some had different species names.

This Dracaena trifasciata (syn. Sansevieria trifasciata) (Mother-In-Law’s Tongue) was given to me while living in Mississippi. I was impressed that it flowered, but I didn’t understand why the pot was only half full of potting soil. I decided to repot it and give it a full pot of potting soil. Well, it absolutely didn’t like that and started going downhill. I brought it with me when I moved back to Missouri where it continued to decline…

I brought this Dracaena trifasciata (syn. Sansevieria trifasciata) ‘Bantel’s Sensation’ home from Lowe’s in April 2013. One of it’s common names is the White Sansevieria. I thought it was neat because of its verticle variegated leaves.

The Dracaena trifasciata (syn. Sansevieria trifasciata) ‘Hahnii’ was also given to me by my good friend and fellow plant collector Walley Morse while I was living in Mississippi. He gave me a couple of these and, like the  Mother-In-Law’s-Tongue, their pots were also half full of potting soil. They also started going downhill when I re-potted them…

Hosta have always been one of my favorite plants to grow. I started collecting them when I moved to this farm after my grandfather passed away in 1981. Unfortunately, I moved in 1987 and left them behind and my parents didn’t have time to take care of my flower beds. Then, after I was living in Mississippi, I started collecting Hosta again. However, the climate there wasn’t good for them but I moved all but one (which died) with me back to the family farm in 2013. They did MUCH better and I added several more. We have had our ups and downs with moles, deer, and Japanese Beetles eating the leaves from the trees that provided them shade. I do have a page titled Hosta Information and Sources but I haven’t included links to all the pages of the Hosta yet. I will get that done at some point. You can find their pages by scrolling down the list on the right side of this site.

Since 2009, I have grown 18 different cultivars and six have died along the way. I figured out too late moles had tunneled under a few of them over the winter which caused their demise. A few of them just didn’t do well and eventually fizzled out. Each year the deer nibbled on the Hosta ‘Potomac Pride’ only once then they left them alone for the remainder of the summer. BUT, 2021 was a different story. They continued eating the leaves of several of them all summer long…

I am not going into a lot of detail about the Ledebouria socialis ‘Paucifolia’ and ‘Violacea’ (Silver Squill and Violet Squill) here. They are great plants and very easy to grow. I did give in and start using the cultivar names rather than the variety name in parenthesis (which are synonyms) because they have been grown in cultivation for A VERY long time (like 150 years more or less). I had resisted because of the difference between varieties and cultivars and what those words mean. I bought both of these plants at the same time and ‘Violacea’ has ran circles around ‘Paucifolia’.

The Liriope spicata (Monkey Grass) was growing all around the old fish pool in the backyard at the mansion in Mississippi. It is also hardy here in Missouri but I haven’t tried it yet. 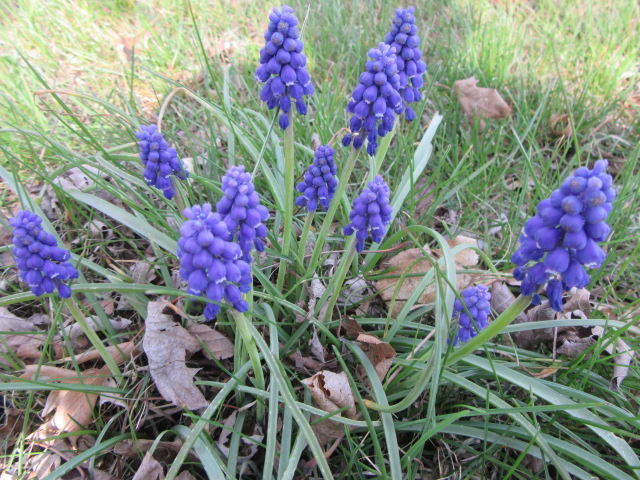 Muscari armeniacum (Grape Hyacinth) are quite a common site and have naturalized in many yards. Maps online are typically way off, but the one on iNaturalist shows where members have made observations. They should be treated as an introduced species species of wildflower as they have colonized in yards and abandon home sites throughout much of the United States and a few other countries.

Ophiopogon japonicus (Mondo Grass) was gowing in several areas in the back yard at the mansion in Mississippi. I also transplanted a lot of it here and there. I really liked it but unfortunately it is not hardy here on the farm…

There is a VERY LARGE colonly of Ornithogalum umbellatum (Common Star of Bethlehem) in the pasture here on the farm. There are 213 species in the genus.

That is all I have for this family at the moment… Never know what I will find in the future. 🙂