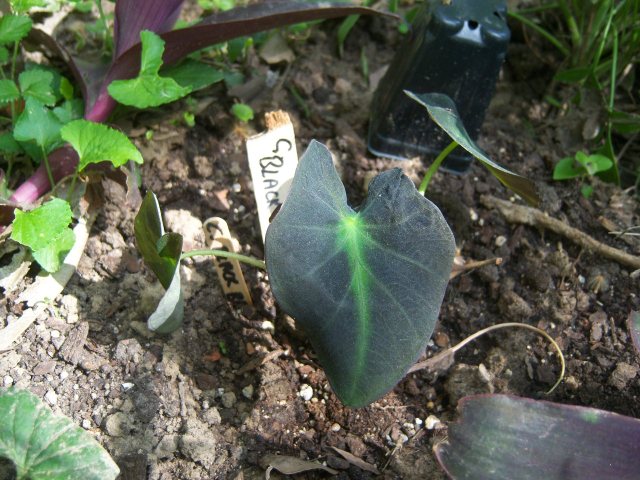 I bought my Colocasia ‘Black Beauty’ as a starter plant from Wellspring Gardens in the spring of 2012.

Brian’s Botanicals also said he has overwintered ‘Black Beauty’ in zone 6 with heavy mulching. They supposedly grow 4-6 feet tall but some websites say much less… The darker leaf color is better in more light. They prefer sun to part shade and are hardy in zones 7a-10b.

I didn’t bring this plant with me when I moved from the mansion back to the family farm in February 2013. Someday I may purchase another Colocasia ‘Black Beauty’ or a similar cultivar.

I am no aroid expert and I only grew this plant as a companion for one season. I liked its dark stems and dark green leaves and had no problems with it at all. As with many Colocasia you buy as small plants, it can take some time for them to reach a dramatic size. So, if you buy smaller plants and they don’t get 6-8’ tall by the end of the summer, just be patient. They now have rhizomes that you can store for the winter and they will make larger plants the next season. Unless you live in a zone they can stay out all winter… Just make sure the rhizomes don’t remain too wet over a cool winter outdoors.

You also need to make sure you have your Colocasia growing in an area they like and will do well. Otherwise, your plants will not grow well and attain any size. When I lived in Mississippi, the Colocasia esculenta grew HUGE. Now, in mid-Missouri, I only have room for two that can grow HUGE and the rest remain small because of where I have to grow them.

Keep in mind Colocasia grow new rhizomes each season on top of the old one. If they aren’t growing where they will thrive, their rhizomes will actually get smaller.