Hello everyone! It is an interesting time of the year to go wildflower hunting since most of them have gone to seed. There are still a few flowering, especially where the hay was cut. I also noticed there weren’t as many insects as last week but there are still a few Monarch butterflies. The weather has been nice for the most part but we are supposed to have a couple of chilly nights. After that, it will warm up a little again.

Of course, the seeds of the Desmodium paniculatum (Panicledleaf Ticktrefoil) are always trying to hitch a ride. I have done pretty well avoiding them until the last three times I went out. This time was the worse. I walked through the middle of the south hayfield to avoid them which turned out to be a good idea. Unfortunately, I had to go through them to get to where I was going. I was on a mission. 🙂 Then when was finished, I walked out of the briars and looked at my boots. GEEZ! I should start wearing my old rubber boots with the hole in them. After that, I didn’t bother trying to avoid them. When I came back to the house, I removed them off my pants then sat down on an old telephone pole to pick them off my boots.  I removed them from one boot then thought how glad I was they weren’t those other stick tights (from the Torilis japonica). I pulled off the other boot and sat my foot right down on a cluster of the other stick tights I hadn’t noticed when I sat down. GEEZ!!! My sock was LOADED! One of their common names is the Tall Sock Destroyer and they live up to their name.

I originally went out for the walk to check on the last of two milkweed seed pods for the experiment crew at the Augusta University Biology Department in Sioux Falls, South Dakota. They are studying the Showy and Common Milkweed and the hybrid species between the two. The Common Milkweed (Asclepias syriaca) grows in the eastern half of the United States and the Showy Milkweed (Asclepias speciosa) grows in the western half. There is an area where they overlap and hybridize in the middle. They contacted members of iNaturalist that submitted observations of these milkweeds to participate in the study. I agreed to participate so they sent envelopes for the samples. I mailed the two pods on Thursday.

Their information says, “We gave been collecting genetic, metabolomic (any small-molecule chemicals found within a tissue sample), and phenotypic (physical characteristics, such as shape of the leaves, color of flowers, etc.) data by taking leaf and seed pod samples from plants in each species zone and within the hybrid zone. Once we have finished collecting this data, we will begin to analyze the differences between the two species and their hybrid species. With this information, we hope to begin to understand why these species remain geographically separated and how genes are passed between them.”

On the way to where the milkweed was, I stumbled on something very interesting…

I remember seeing maroonish leaves on another plant just like this one closer to the briar patch a while back, but this one was more in the center of the hayfield. I didn’t pay much attention earlier because I thought the plant had maroonish leaves because maybe something was wrong with it. You just never know… Weird things happen in nature. Anyway, Wednesday I saw this one with flowers and I completely didn’t recognize it. Of course, I took A LOT of photos. 🙂 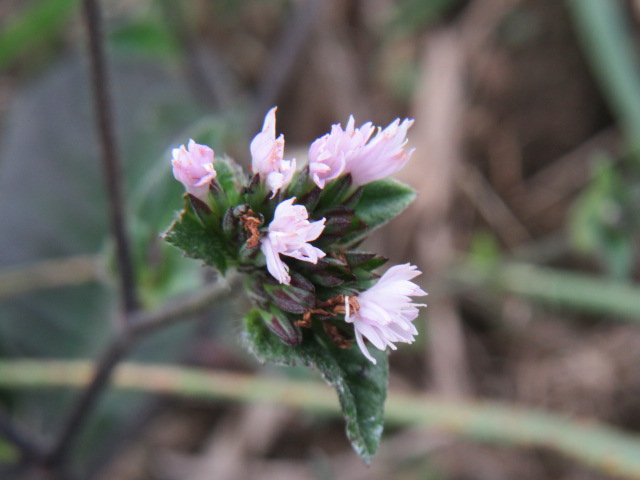 The large leafy bracts should have turned a light on because I have identified only one species like it. The flowers weren’t open which is probably why I still didn’t recognize it.

After I went through the 94 photos I had taken for the day and deleted the ones I didn’t want. I separated them by species and uploaded the observations on iNaturalist that I already knew. Then, I took the first photo for this one and uploaded it for ID. It suggested ONLY Elephantopus carolinianus. I thought it was completely whacky! I did the same to the second and it said the same thing. I took a better look at the second photo and then it hit me. HOLY CRAP! I have Elephantopus in my hayfield!

I first saw this species on September 9 in 2019 while I was herding cattle on a friend’s mother’s farm. I was in a dead run going down a wooded hillside toward the creek when I spotted them. I almost rolled the rest of the way down. Anyway, you can read about it on THIS POST.

The Elephantopus carolinianus (Leafy Elephant’s Foot) is definitely one of the most interesting wildflowers I have ever seen. I will try and get photos of its flowers opened up, but you can click on the name above to go it its own page. 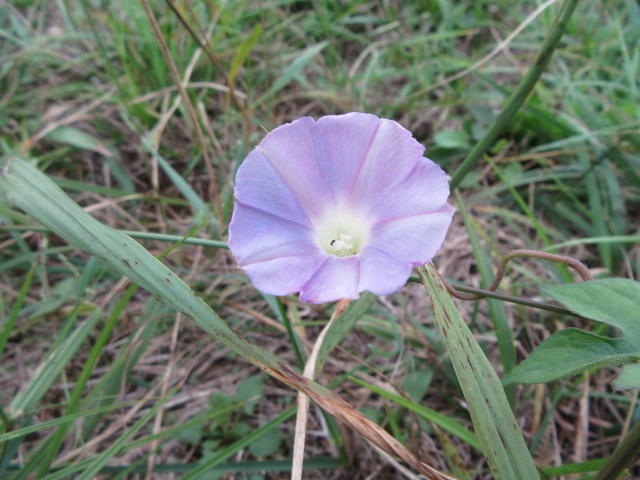 There were several Ipomoea hederacea (Ivy-Leaved Morning Glory) blooming in the south hayfield as well. I don’t have a page for this one because I just got a proper ID. 🙂

Then I walked to the southeast corner of the hayfield to go to the back pasture, through the blackberry briars…

The Vernonia missurica (Missouri Ironweed) are still blooming up a storm. They attract A LOT of pollinators and other insects that have a hard time finding food this time of the year. Normally, they probably aren’t flowering that much now, but they regrew after the hay was cut. I do not have a page for this species yet.

There are still a few Monarch’s flying around the ironweed but not near as many as last week. This one let me get very close. 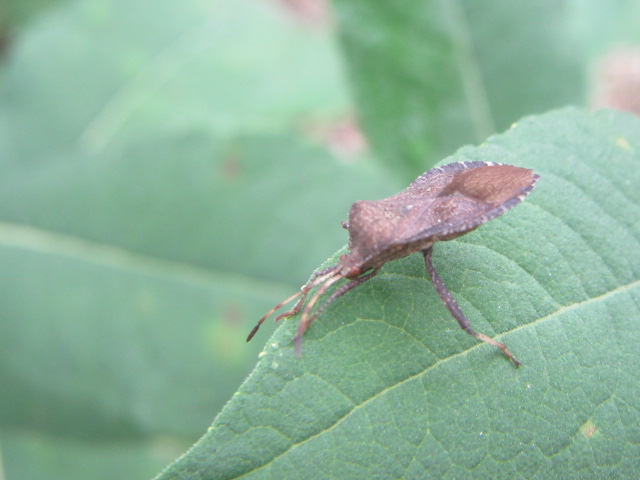 There are many species of insects that look similar to this Helmeted Squash Bug. This one was feeding on what looked like whiteflies when I first saw it and it didn’t really like my intrusion. I asked it to pose and give me a big smile but it kept looking at its food.

There is a lot of Croton capitatus (Hogwort, Wooly Croton, Goatweed Etc.) flowering in the back pasture right now… There aren’t usually that many here…

Then I walked north toward the… 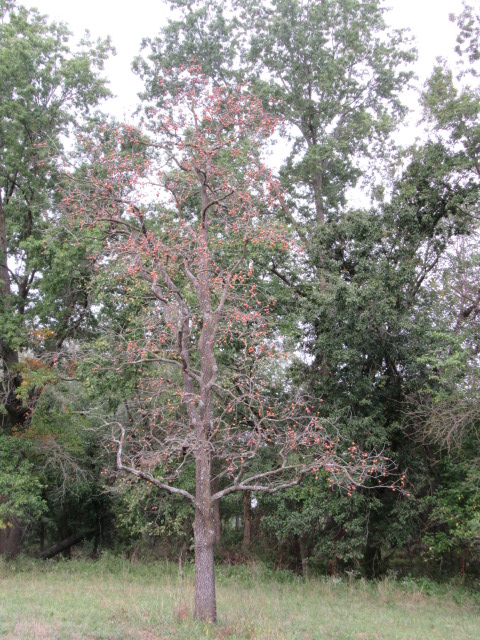 The Diospyros virginiana (American Persimmon) tree in the back pasture is really LOADED this year.

Besides being able to cut the milkweed seed pod and seeing the Elephantopus, being able to eat a few persimmons made the whole walk worthwhile. Then I walked to the house to pick off the mess on my boots.

That’s all I have for now. Until next time, be safe, stay positive, and always be thankful.

10 comments on “Wildflower Catch Up With A Few Bugs…”