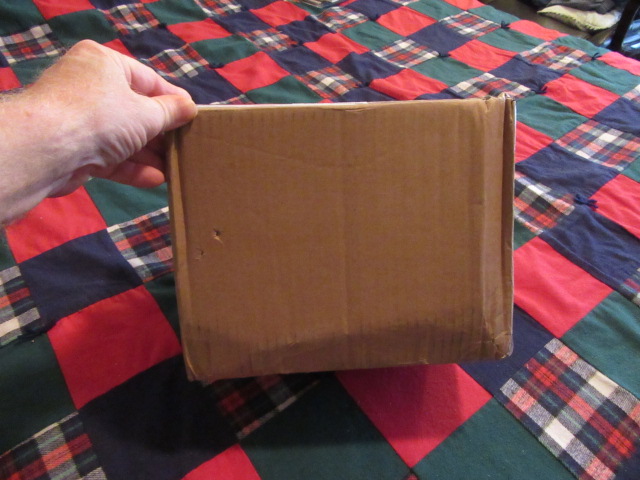 Hello everyone! I hope this post finds you well. It has been cool and cloudy the past several days and we had a little snow yesterday evening. By the time I got out of bed, it had almost all melted.

I went to get the mail and was surprised by a box… Hmmm… I wonder what this is? The box is actually bigger than it looks in the photo.

Well, I knew what was in the box because I had been expecting it. Tony Tomeo, a fellow blogger and friend that you may know, offered to send a few Epiphyllum and I couldn’t very well refuse. I have not grown any, so it seemed like a great opportunity to give them a shot. I am barely trying to give a good enough reason to acquire more plants even though I personally don’t need a reason or excuse. 🙂 But if someone were to ask why… Truthfully, no one comes for a visit so I don’t have to explain myself to anyone. That’s a good thing, because if anyone was to come and ask “why” I would probably just look at them rather blankly. It’s isn’t like I am a plant hoarder. 🙂

Information from the tracking number Tony sent said they were supposed to be here on Monday. Monday came and I went to the USPS website and put in the number. The first several times I tried, it said “the service wasn’t available at the moment” or something to that effect. Finally, it said Monday was the expected delivery date but it could be delayed… Well, by that tie my mail had already arrived and there was no package. I stopped by the post office later in the afternoon and gave the clerk the tracking number and he said packages are 4-5 days behind… He said if I didn’t get it by Thursday to come back… GEEZ! Luckily, the plants arrived safe and sound although very cold but they seem OK. 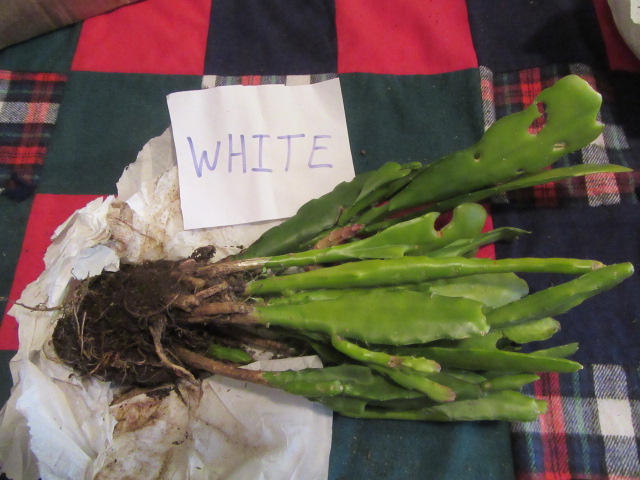 The plants were all wrapped very well so they couldn’t help but arrive safe and sound. The largest group is a white cultivar Tony said were his favorite and they produce very big and fragrant white flowers. 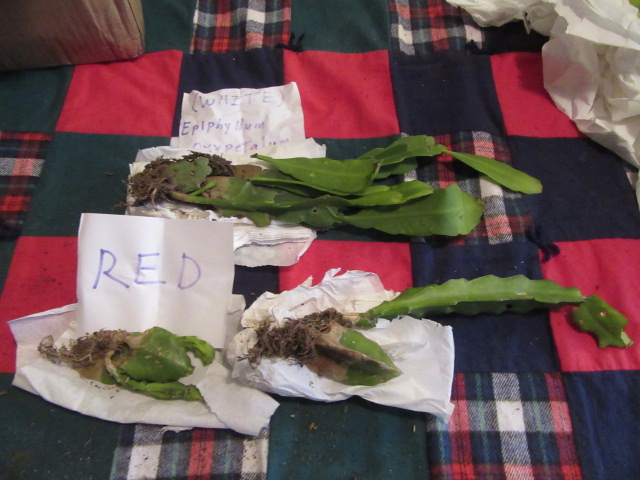 One group is a white Epiphyllum oxypetalum, one is a red cultivar, and the other is likely the pink and white cultivar Tony mentioned. Now, I will put them in pots so they can do their thing…

I want to thank Tony for sending so many plants and giving me the opportunity to try something different. Variety, you know, is the spice of life. 🙂 It is so good to have friends that help with a good addiction in a positive. Plant collecting is a great hobby and is no different than some people collecting baseball caps and cards, antiques, old tools, teapots, oil lamps, coins, stamps… Well, you get the picture.

If you don’t know Tony Tomeo, pop on over to his blog by clicking HERE. He is very well experienced and knowledgeable in the horticulture field and always has interesting posts and plenty to say.

Well, I better close this post so I can do some potting. I am also in the process of repotting the cactus and succulents. I know “most people” probably do it in the spring, but I like to do it in the fall and winter because their potting soil gets very hard once you stop watering. From the time I bring the plants inside for the winter in mid-October until sometime in late April to early May, the cactus and succulents get barely any water. Because of that, the peat in their potting mix gets VERY HARD so I re-pot with fresh so it will be nice and airy. I mix Miracle Grow Potting Soil 50/50 with pumice. I used 1/8″ before but I have switched to 1/4″.

Until next time, be safe and well, stay positive, and always be thankful. Always try to get as dirty as you can even if it is inside. 🙂