Hello everyone! I hope this post finds you well. My daughter and her family came up for a visit this afternoon (Saturday). I finally got to see my new granddaughter, Allison, in person. This first photo is priceless. It is like she is saying, “Who is that old fart?”

As I suspected would happen, Melissa wanted me to hold the baby… It doesn’t look like she was any too happy to meet grandpa.

Melissa thought I should smile, so I did my best. Allison is thinking I am faking it…

I am thinking I should have cut my hair so we would both be bald. To early to tell if she has Miller ears… Melissa does but she is covering them up. Her brother, Nathan, is balder than I am, but he also has Miller ears. He is in Indiana now. 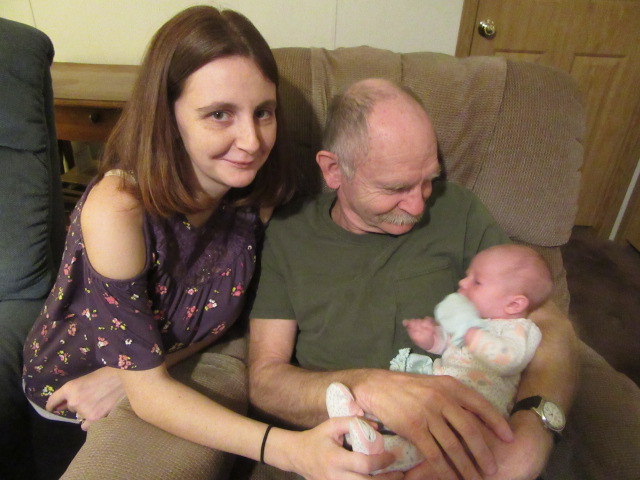 There was another photo, but by then Allison had enough and was beginning to get somewhat squirmy. She got this weird look on her face and I wasn’t sure if she was going to poop or cry.

I intended to take photos of Paul and his two daughters, Starr and Lakendra, but I forgot.

Jade, the cat that occupies the house, hid and was nowhere to be found. BUT the little black tom kitten (with no name) eagerly accepted Lakendra’s friendship and came in the house to play. I thought that was odd since he isn’t hardly ever around anyone but me but he took up with the little girl… He even let her pick him up and carry him around. I was to busy watching and didn’t take photos… GEEZ!

Little Bit was down at the barn but came up later when I filled the food pans. She was not interested in strangers at all. Then I took the piece of bamboo with yarn tied to it to try and get her to come in. While she did want the toy, she didn’t want to come into a house with strangers. She said, “the last stranger you took me to a few days ago ended up with me getting spayed.”

After they left, Jade was still MIA. I looked everywhere for her and could not find her. I couldn’t imagine where such a large cat could be hiding since all the bedroom doors were closed. Finally, I looked under my bed and there she was. She must have been in my bedroom before they came and then hid so I wouldn’t bring her out to meet the family. She still didn’t come out until I was eating dinner then she had to look the place over to make sure the coast was clear.

Well, that’s it for this post. I couldn’t very well use it for a Silent Sunday and I already did the Six On Saturday. I wonder what I will come up with for Silent Sunday?

Until next time, continue to stay positive, being safe, and always finding things to be thankful for.

16 comments on “Visit With Daughter and Family”