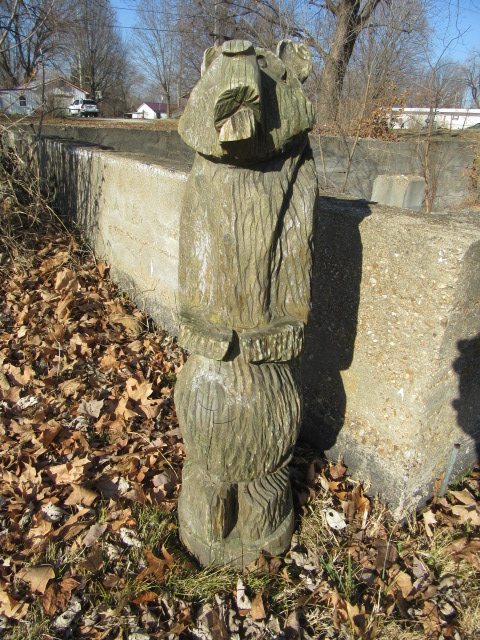 Hello everyone! I hope this Six on Saturday post finds you all doing very well. It has been a pretty good week with temps continuing to dance around. Today is sunny and it is supposed to get to 48° F. The forecast says 55° on Sunday, 48° on Monday, then 37 on Tuesday and Wednesday with a LOW of 19° by morning. Then back up to 48° on Thursday with a low of 30. ‘Tis the season…

#1 for this Six on Saturday is the cedar carving of a bear given to me on Thursday by friends who were going to throw it out. I could not let him be thrown in the dump sight to be burned so I brought him home. Someone else might have spotted it… 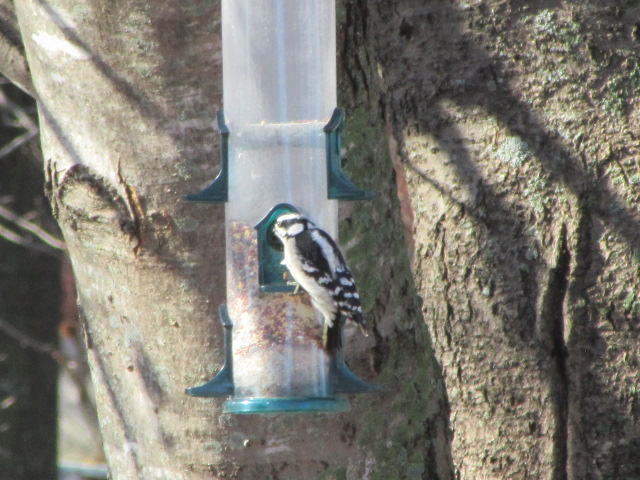 #2-I took a shot of this Downey Woodpecker (Dryobates pubescens) on the hanging feeder. It was pretty happy by itself on the feeder. It seems the migratory birds are slow to come this winter. I did see a few Juncos a few days ago and also a couple of Nuthatches. Even though I haven’t seen many birds, somehow the feeder was empty in a week. Maybe the wind blew the seed out…

No doubt the Downey is hiding seed in the fork of the tree.

#3-The Lysimachia nummularia ‘Goldilocks (Creeping Jenny) is hanging in there in the north bed. When it gets really cold it will completely disappear.

#4-The Achillea millefolium is pretty tough in the heat of the summer right up until it gets severely cold. They are still growing new leaves!

#5-The Nandina domestica (Heavenly Bamboo) still has a few green leaves. I learned something this week from a post shared by Eliza Waters. The post says the berries are poison to birds! I never knew that so I suppose I better remove them.

The red berries of Nandina domestica contain cyanide and other alkaloids that produce hydrogen cyanide (HCN), which can be poisonous to all animals.

Tom Oder writing for Mother Nature Network has this to say: “Nandina berries actually have a low toxicity, but they can be lethal to cedar waxwings specifically because their feeding habits differ dramatically from that of other birds, said Rhiannon Crain, project leader for the Habitat Network with The Nature Conservancy and Cornell Lab of Ornithology. “Other birds don’t eat as much or as rapidly as cedar waxwings,” said Crain. “Cedar waxwings completely stuff every possible part of their body with berries. They will fill their stomach and their crop with berries right up into their mouth until they can’t fit another berry inside of them.”

#6–Hmmm… It seems like with nine cats there is always one following me around when I am in the yard. This one is the kitten that was given to me by a friend (Kevin). It showed up at his house and somehow he talked me into bringing it home. That was several months ago when she was very small…

She is a very odd-looking cat with long black hair with silvery streaks. The hair on her legs is shorter giving her an even stranger look (reminding me of a fox). She is very smart, almost human, which can sometimes be annoying. My son called her Little Bit but I have had a few other names for her. She is now an outside cat but teaching her not to dart in every time the door opened wasn’t easy. She is so fast!

Well, that is it for this post. If you wish to participate in Six on Saturday posts, be sure to read the Six On Saturday-a participants guide from The Propagator.

Until next time, be safe, stay positive, and always be thankful! Get dirty if you can. I know I will one way or another… 🙂

11 comments on “Six on Saturday”