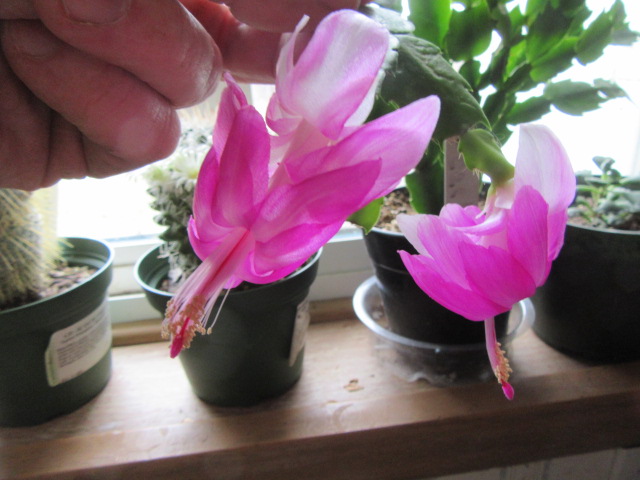 Hello everyone! I hope this post finds you well. I know the flowers of the Schlumbergera tuncata are really neat, but I have mixed feelings about it.

I brought this plant home from Wagler’s Greenhouse in September last year and the tag clearly says “peach”. She had a lot that she buys from somewhere. Last winter it had a few buds, but because of neglect, they fell off. Hmmm… It was with other plants that don’t require attention during the winter. So, this year I put the plant in the kitchen windowsill where I would be sure to see it every day and water as needed.

Then it grew buds… Then it flowered, as you can tell, but the flowers are PINK not PEACH. So, since I had a little time this afternoon, I went to Wagler’s to see if Ruth had any that were actually peach, or white, or any color besides pink. I also had a few cuttings of Stapelia gigantea to give to her. We trade a lot of plants. 🙂

She wasn’t in the greenhouse so I knocked on her door. She came and I told her I had a present for her and her face lit up as I handed her the cuttings. She said she had some new plants to show me so we went to the greenhouse. OK, I haven’t been there for several months because I know what always happens…

I think when I was there last fall a lady brought her several Bromeliads from a grower in Florida. Well, some of them produced offsets and even flowered. She handed me one and said I could have it if I wanted. Hmmm… Of course, my hands just automatically responded. I looked at several of the others and the one that always caught my eye was solid green. Fortunately, it hadn’t flowered or produced any offsets. Then she handed me another pot of a different Bromeliad and said I could have it, too. Oddly, I declined. I told her I needed to see how the one she gave me already would do before I brought home more. I was quite proud of myself.

Then she showed me a new succulent she had and asked if I had these two particular cactus. Fortunately, the two cactus in question were the Acanthocereus tetragonus and Mammillaria vetula subsp. gracilis. I told her I had those already and they came from her.

The succulent was a different story… She asked what it was and I told her it appeared to be a species of Euphorbia. She asked her if I had one and I told her no. She said, “You can have one.” AGAIN, my hand just reached out and took one like it was an automatic reflex! It is 2 3/8″ tall without the leaves.

Then she said if I saw any other plants I wanted I could have them. GEEZ! There are a few but I have to wait until she has cuttings or plants of them…

She has A LOT succulents that are unnamed that would be a nightmare for me. They are Sedum, Echeveria, etc. hybrids like x Graptovera, x Graptosedum, and so on. Unnamed and many leaf colors, shapes and cultivars that look so much alike. They need bright light in the winter which I don’t have much of at the moment. I have one window that faces south and it is full with three shelves of plants. She still has offspring of plants I gave to her but she doesn’t write their names on the labels. LOL! When she asks me the name of plants and I tell her she says she doesn’t see how I remember all the names. Well, first you have to write their names down on the labels so when you look at the plant you see the label. It’s a way to help subconsciously remember. I have pretty well memorized what I have grown but when I bring home several different cactus it sometimes takes a while to memorize. I have a list handy and the photo folders to help me remember. I have to keep rewriting the labels because the permanent marker is not so permanent. Some genera of cactus and succulents, like any other plants, have certain characteristics that only they have.

Oh yeah! I did ask Mrs. Wagler if she had any more of the Holiday Cactus. I told her the one I brought home that was supposed to be peach turned out pink. She laughed and said that happens if the tags get mixed up. Hmmm… Unfortunately, a man came several times and bought most of the Holiday Cactus so she didn’t have any more available. GEEZ!!! She said she would see if she could get more. Then she said the ones labeled orange look more peach. OK, I might take a few different colors as long as they aren’t pink…

So, now I have a bromeliad and Euphorbia to find the name for. At least I think it is a Euphorbia… 🙂

This plant is an Austrocylindropuntia subulata commonly known as Eve’s Needle. I had one before that was a monstrose form… 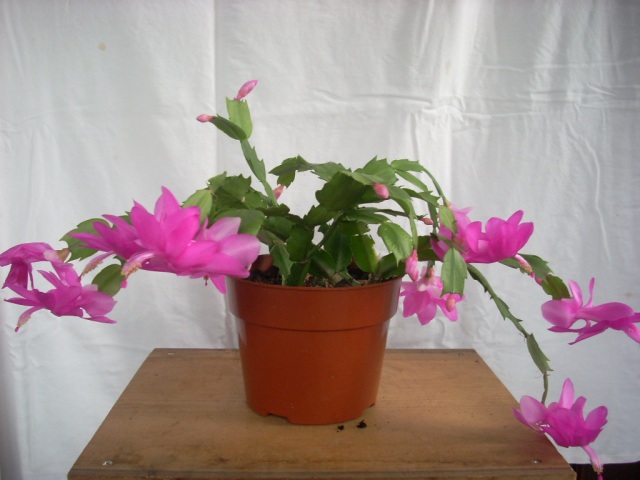 The above photo is the Schlumbergera truncata that a friend gave me when I lived at the mansion in Mississippi. One of HUNDREDS of plants I gave up when I moved back to Missouri in February 2013.

That’s all for now, but I do need to post photos of the Mammillaria karwinskiana. It has more flowers and they have all been open for a few days. Still growing more buds, too.

Until next time, be safe and stay positive. Be thankful, open-minded, and allow the Universe to shower you with abundance. Get dirty if you can, something I have no trouble doing.