Hello there again! I hope this post finds you all well. When I was mowing on Monday I was stopped dead in my tracks. The new Leucocasia gigantea ‘Thailand Giant’ had done something very weird…

(UPDATE!!!! Ummm… I found out this plant is NOT a Leucocasia gigantea ‘Thailand Giant’. It is, in fact, a Xanthosoma robustum…) 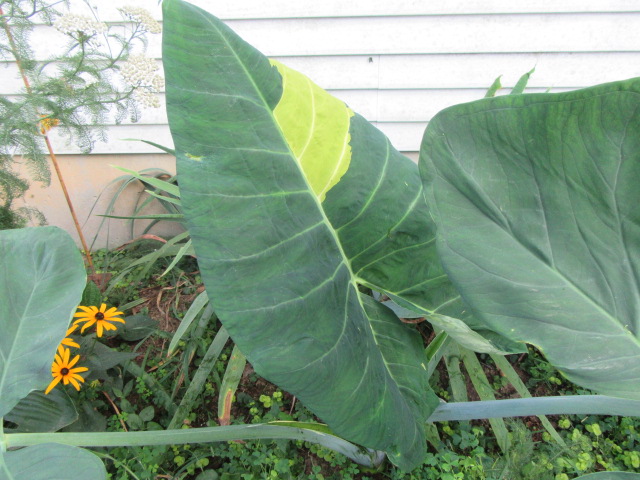 Ummm…A VARIEGATED LEAF?!?!?! Its new leaf started emerging from the last petiole a while back showing no sign of it being weird. I am always anxious to see how big the next leaf will grow to. Each new leaf usually grows larger than the one before. While there are variegated cultivars of Alocasia and Colocasia, which I have never grown or seen in person, this is completely strange. I have never heard of a Leucocasia gigantea ‘Thailand Giant’ with variegated leaves.

Remember, Colocasia gigantea is now a synonym of Leucocasia gigantea. It is in a genus all by itself now… Testing showed this species is more closely related to Alocasia than Colocasia but it has several traits that separate it from both genera. Some information online suggests it may be a naturally occurring cross between Colocasia esculenta and Alocasia macrorrhizos. That would be strange because the way Leucocasia gigantea flowers is completely different than the other two.

The species was first named was Caladium giganteum by Carl (Karl) Ludwig von Blume in 1823. Then in 1857, Heinrich Wilhelm Schott named it Leucocasia gigantea. Joseph Dalton Hooker decided it should be Colocasia gigantea in 1893 and that’s what it remained until maybe 2016. Now it is back in its own genus AGAIN where Mr. Schott put it in 1857. Of course, most websites and sellers are still calling it Colocasia gigantea because they have no idea the name changed or they just don’t want to change it. Ummm… I just updated the Leucocasia gigantea ‘Thailand Giant’ page and had to change everywhere I had Colocasia to Leucocasia.

Although this plant is doing very well, it sure seems like it is growing slower than the one I had last year. Maybe I am just anxious. After all, it is just the end of July. Hopefully, someday I will have a 12′ Leucocasia gigantea ‘Thailand Giant’…

That’s it for now. Stay well, safe, amazing, and positive. Be thankful and count your blessings! And by all means, don’t forget to GET DIRTY!